Woops — oh hey friends, it’s definitely been a while, hasn’t it? A lot has happened so…

Why don’t we catch up?

Wow, guys. I realized sometime in October that it has been the better part of a year since I blogged. Not my intention. Even though I’m not a frequent blogger anymore, I know there is still a lot of information that people find useful here. And as we’re constantly growing and changing, someone might find some of it interesting. Or at least entertaining. So here are a few things I’d tell you if we were having coffee and catching up. 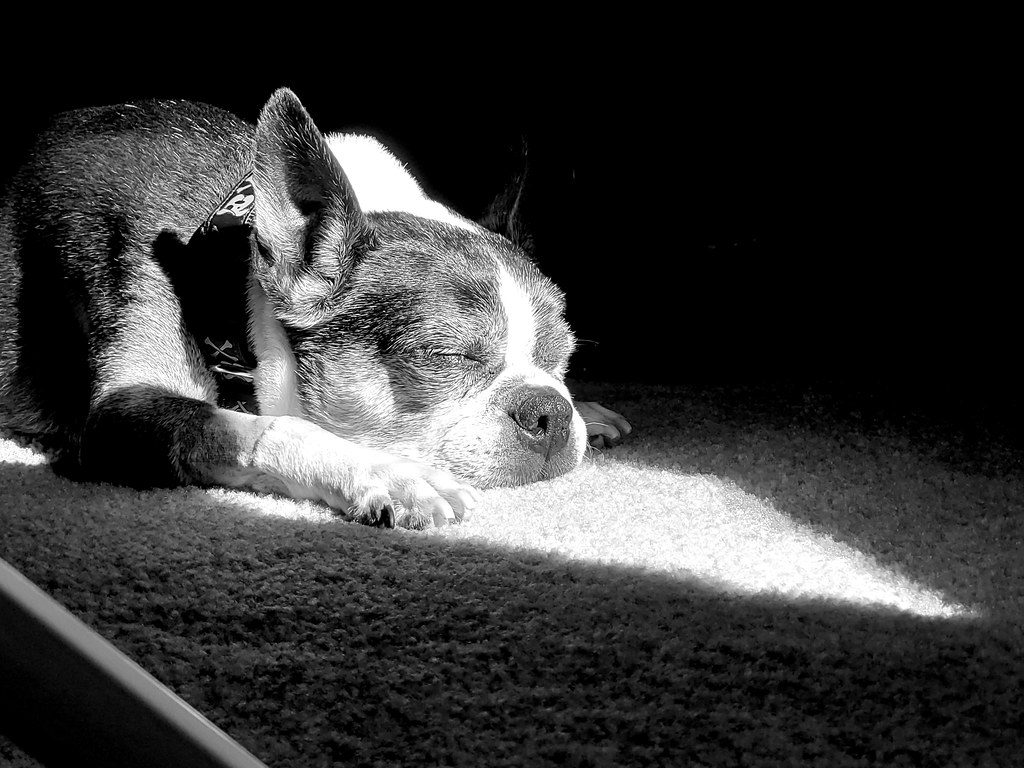 This was by far the biggest change to our family this year. You might remember that he lost most of his sight two years ago after scratching his eye. Since then, his health had been relatively good. He’d always had several small mass-cell tumors on his body. They checked out with the vet each visit, so we never concerned ourselves with them. Well, in the span of a few days in July, the one on his belly just ballooned to the size of a golf ball. We went and had it removed. It was supposed to be a fairly straight-forward operation and recovery.

Within a week, he stopped being able to swallow solid food. He would choke on it and throw up. We took him to the vet and they chalked this up to his age and a known issue with older Boston Terriers. Fine, okay — so we put him on soft food.

Then one morning he woke up and didn’t want to be touched and was screaming. Turns out what we thought was a small scratch on his eye completely ulcerated. Thinking this was a freak thing, we, of course, said: “yes save him, remove the eye.” Eye removal surgery and a lethargic, even-more blind dog came home. We figured it was just recovery.

But he didn’t get better. 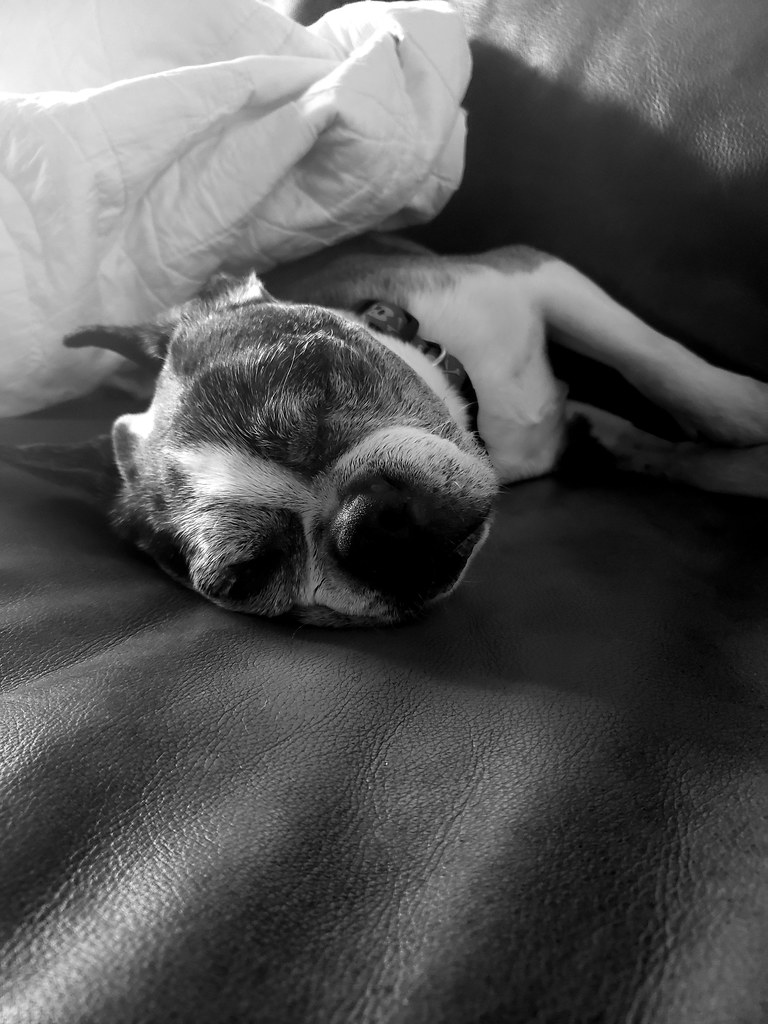 Something was different with him and didn’t improve. He was lethargic. It was like the light was gone from his eyes. He stumbled around, walked in circles, and constantly paced around the house. He was incontinent. I was washing the kitchen floor up to 3 times a day. But we kept going because we loved him so much and he’s already been such a crazy, expensive ride his whole life.

But on the last morning, he woke up and wouldn’t eat. And we knew. In his entire life, Clive had never not eaten. He’s always been crazy about food. We took him in knowing he likely would not be returning home with us. After a blood test came back clean, we deduced that likely he had a tumor in his brain. We didn’t do any crazy diagnostics, but all the little pieces started adding together. We made the decision to save him from pain and to let him go.

It’s the toughest thing I’ve ever had to do. I’ve loved every pet I’ve ever had, but he was my baby. Having old pets is both the sweetest and most bittersweet season.

On a more upbeat note…

We are officially parents of a kid in activities

On a brighter note, we have a bright, thriving 5-year-old who is in a host of activities several days a week. Consistently we have maintained memberships at both the local swim club, and gymnastics gym, but in the past few weeks have started exposing her to CrossFit Kids. I love watching her see the health and emotional benefits of exercise, and I’m especially excited for her to start CrossFit Kids.

To be clear though, it was all Neil and Nate’s idea. Wait, WHO!? On that note… 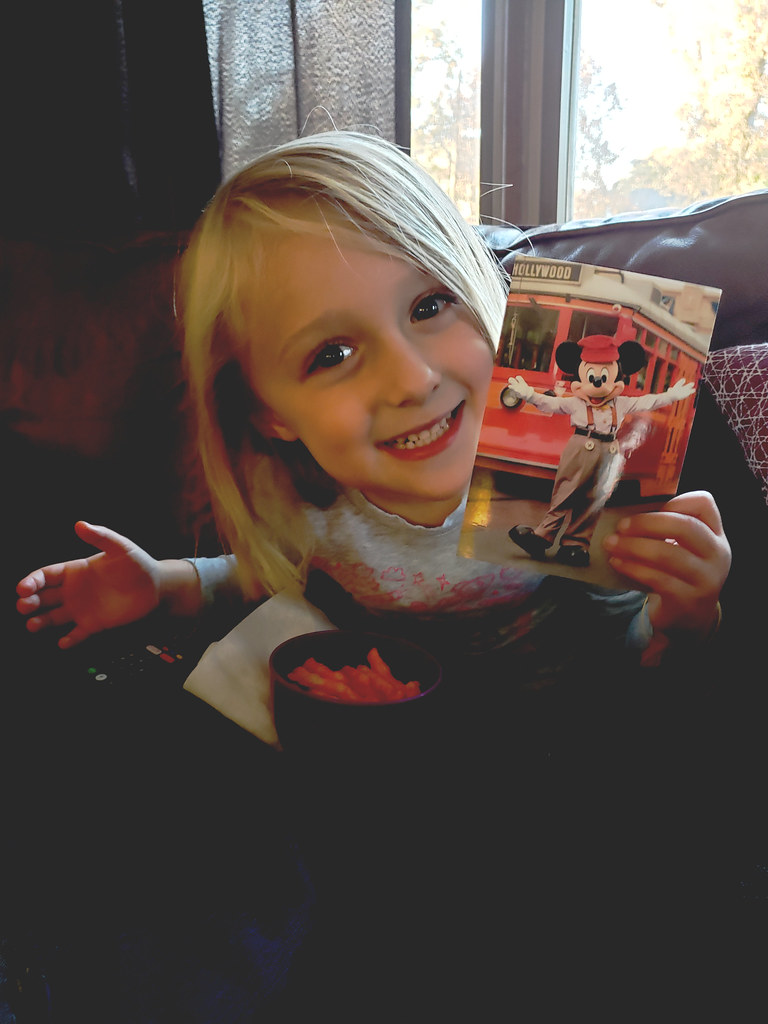 Nate’s back and Fringe is still the best

That’s right, Nate is officially back in Columbia and at CrossFit Fringe! We’ve been growing like crazy. With the expansion finished, and our 2Brain Business Incubator almost complete, we’re ready to hit 2020 running at full speed and toward our next set of stretch and growth goals. It’s been fun to both be a part of it, but not be a part of all of it because we finally have enough hands. And holy cow, has it been awesome to have one of my best friends back in town (you know, since most of my friends live out of town). 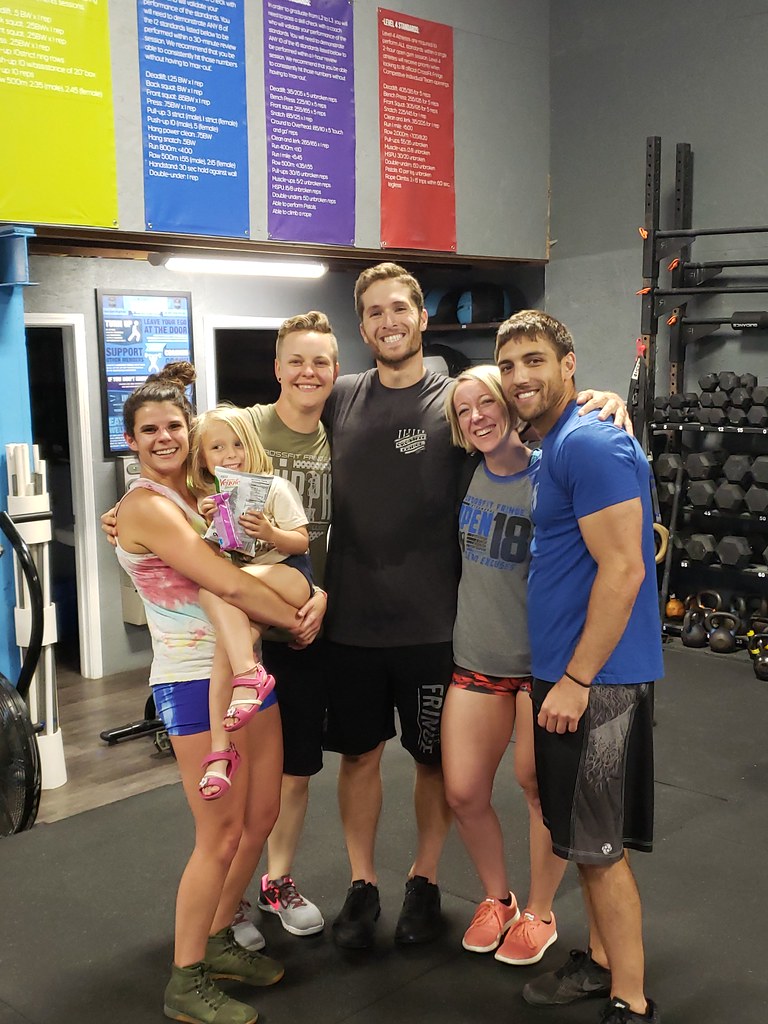 We moved KK to a new school. We’re still in Montessori, but it’s a school that has the capacity to grow alongside her if we choose to keep her there through Kindergarten and beyond. We’re already seeing some amazing developments from her daily — and she’s finally not taking naps and going to bed at a decent hour. She’s also so close to reading now, I can’t wait!

We’ve totally fallen in love with the Montessori method. We’ve seen it at work with KK and people tell us all the time how calm, collected, peaceful, and empathetic she is.

We went on vacation

I know most people go on vacation, but we haven’t been on one in 2 years. The idea of spending a ton of money to stress with a small child all week kept us taking shorter/smaller trips and more of them throughout the year. With KK a bit older now, we wanted to test the waters with a plane trip.

We identified a bunch of places with adult and kid-friendly sights and drew from a hat. Seattle won! We stayed downtown and purely did the touristy stuff, but it was a blast. So much quality time together, a ton of firsts, and a new place to experience. We’re currently planning 2020 and taking suggestions. 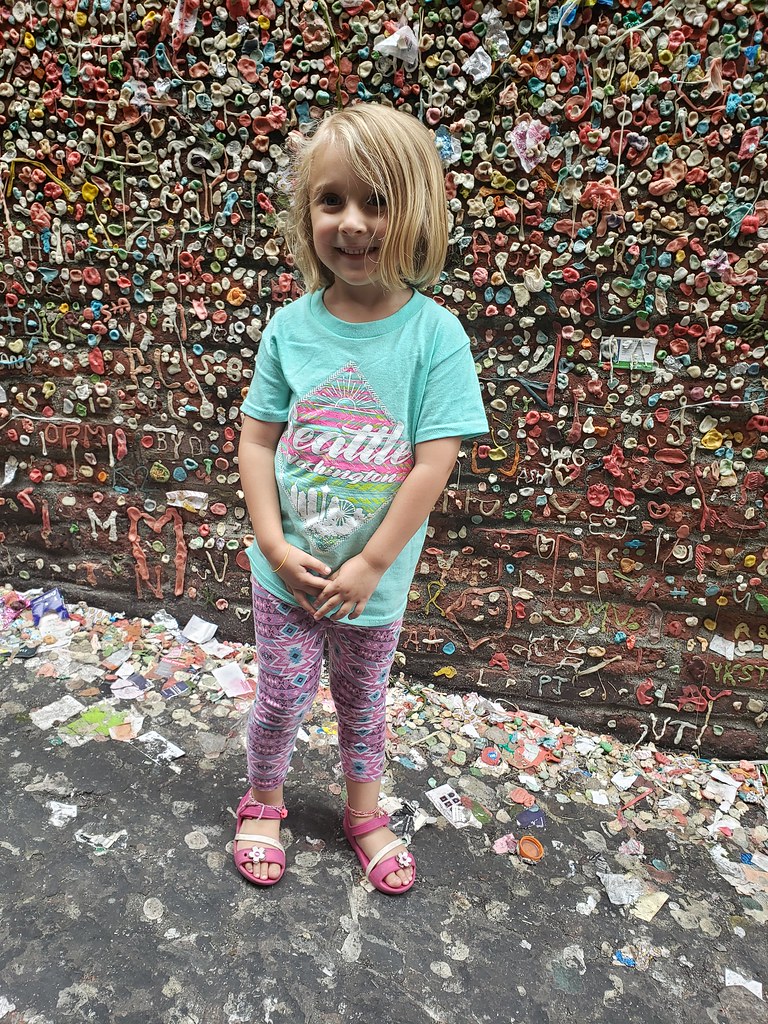 I spoke at a conference

No, I’m not kidding. I got chosen to give a talk at DEVLEARN this year, and it went really well. Public speaking is not my forte, but I’ve come a long way in the past few years (thanks to CrossFit coaching). 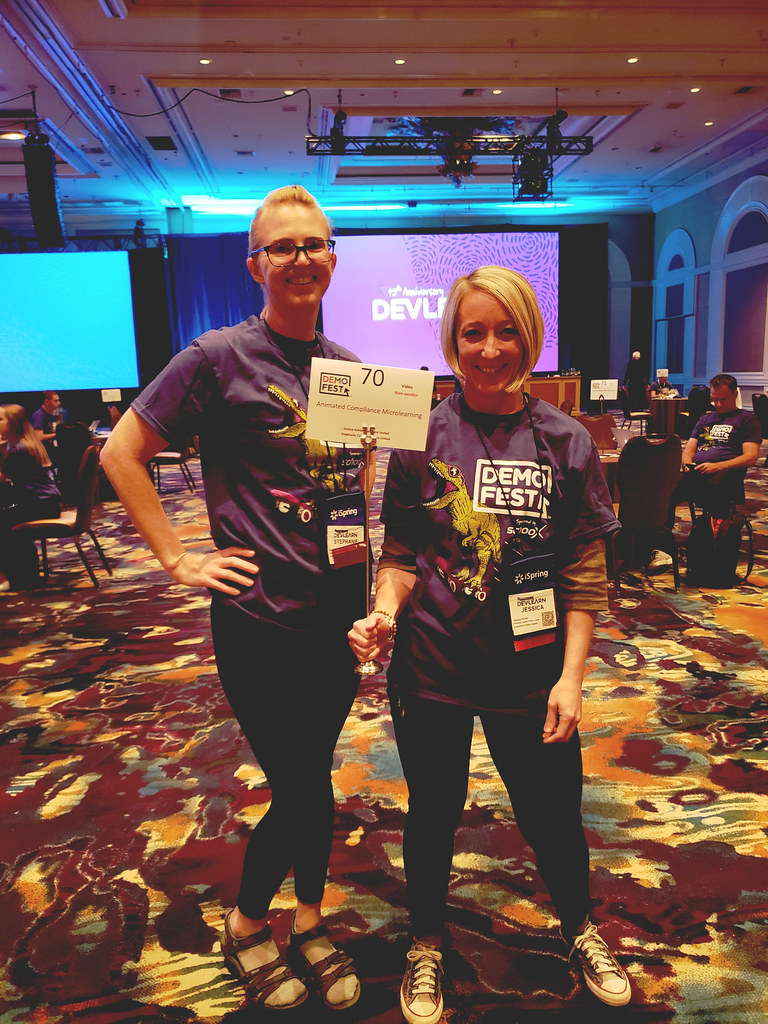 For the past two years, Neil’s work has taken him to the Amazon Web Services (AWS) conference called “re:Invent” Las Vegas. It’s a huge event, over 50,000 people attend. This year we heard it was even bigger at over 65,000 people. It pretty much consumes all of the large conference venues in Las Vegas. It’s really impressive.

To add to the crazy, Neil is always super ambitious and sets the goal each year to complete a certification at the event. As if it were not stressful enough traversing Las Vegas and 65,000 people (my opinion). 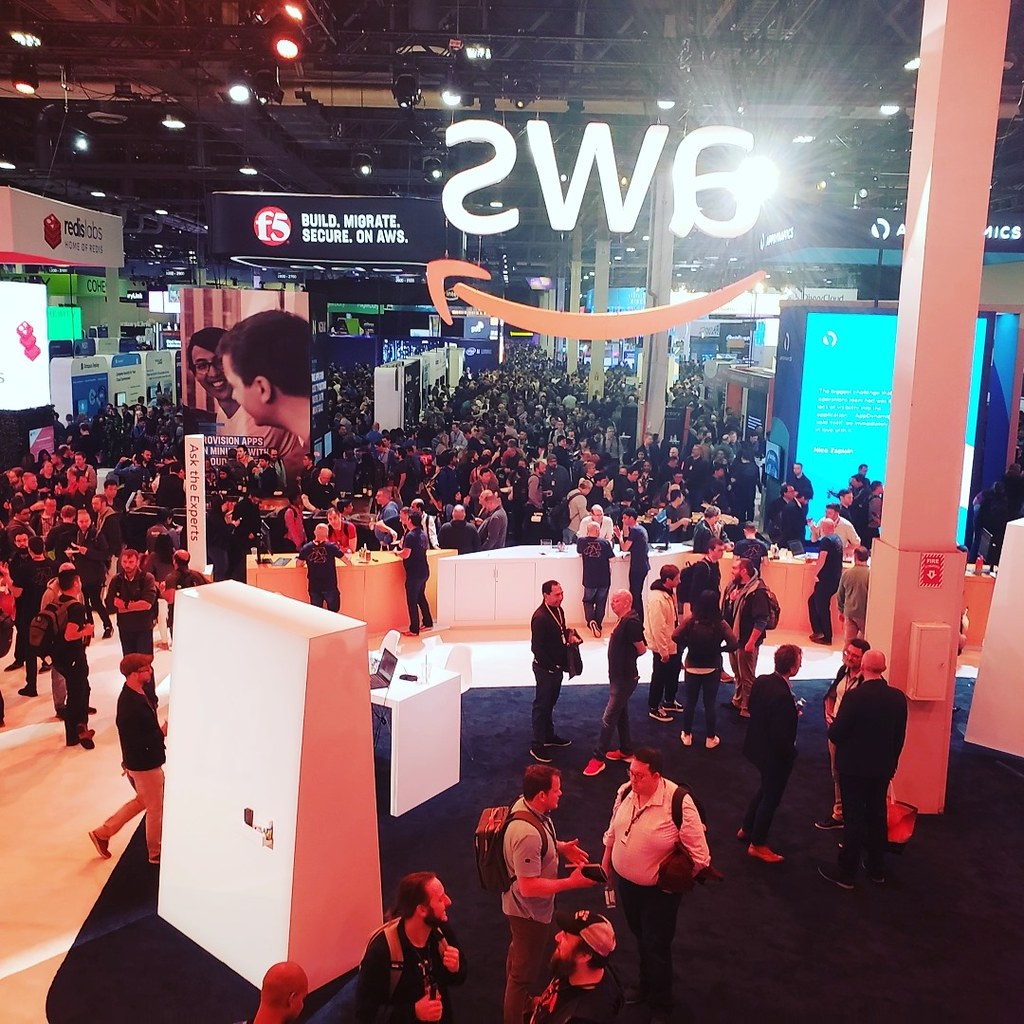 Last year he passed the AWS Certified Architect Associate certification exam. This year he went further and passed the AWS Certified Advanced Networking Specialty exam. This was a pretty tough exam. If you’ve taken a lot of tech exams — you know sometimes the tech outpaces the updates to the exam. Neil had to learn what would specifically pass on the exam, even if it was no longer *technically* true. He passed, but man, I don’t envy him at all, it was stressful. 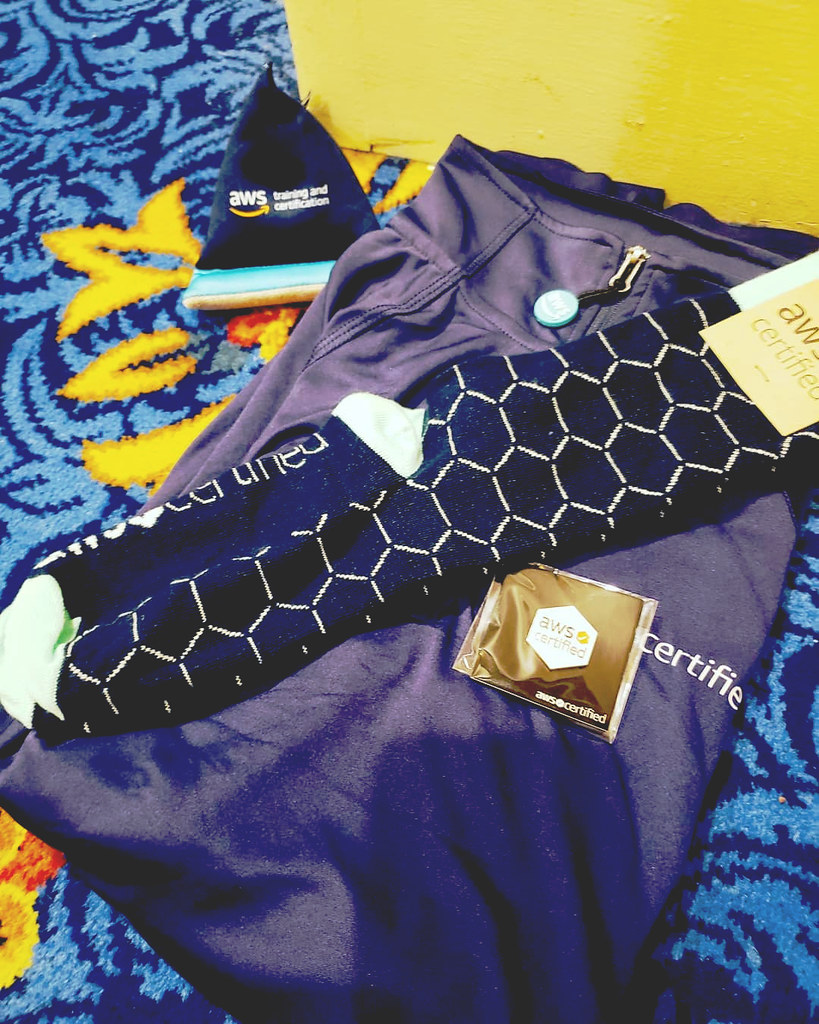 We took up gaming again

Having a little kiddo is a big kick in the balls to your hobbies. We took a big long hiatus as far as gaming, which is something Neil and I have always loved doing together. But as she’s getting older, we’re slowly finding our groove again. I’m still a big fan of World of Warcraft (I have a coworker who loves it as well so that helps), but I try to pay attention to all the games Neil talks about. I can’t wait till KK gets just a bit older and we can start some fun stuff. 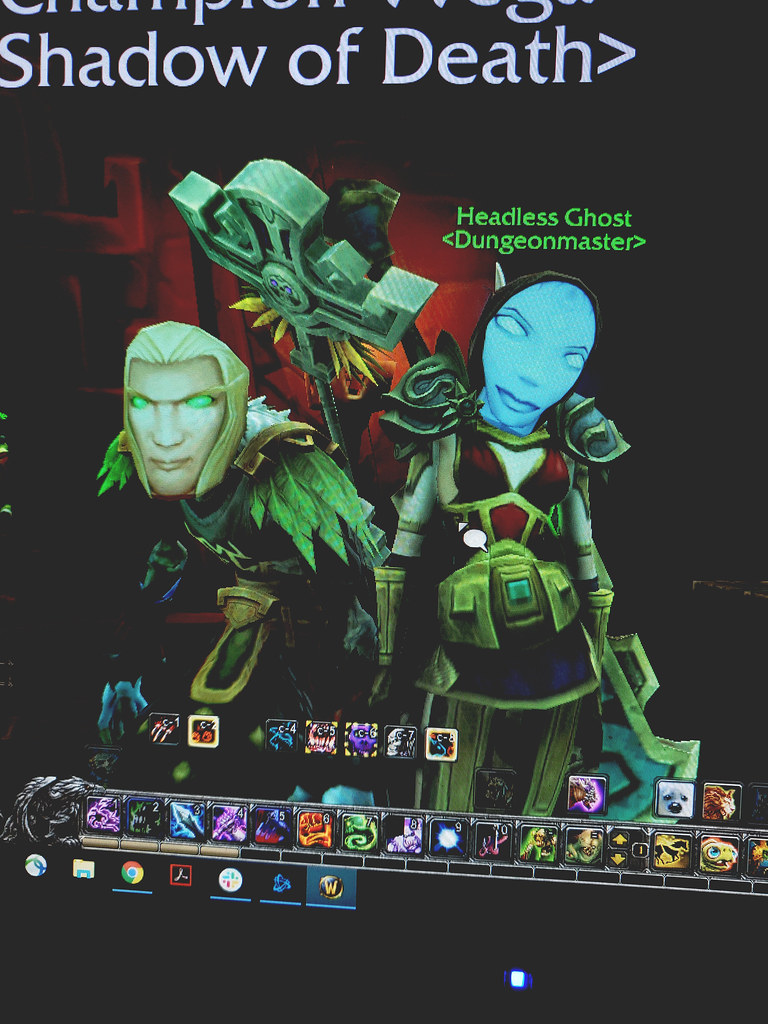 I’m closing in on 150 books for the year

Last year I read 65 books. In years prior I’ve always read between 45-65 books, a great amount by any stretch. When I moved to VU, one of the first “perks” my boss gifted me was Audible. I’d never done audiobooks — I always thought of them as the bundle of CDs you could check out from the library. Boring, clunky, inefficient.

I was so wrong. They changed my freaking life this year. I listen while doing mundane stuff at work, while I’m driving, while I’m training, cleaning the house, anything. The addition of audiobooks coupled with traditional books has given me so much this year. I have loved being able to cover nearly every book I really wanted to in 2019. 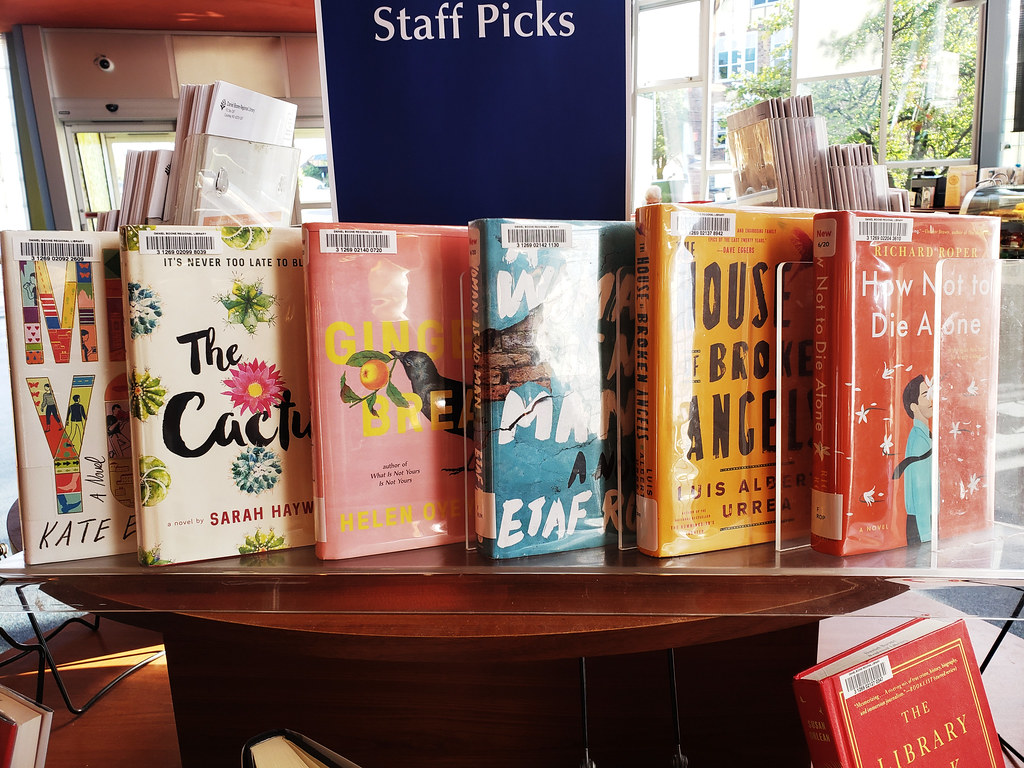 So yeah — a crazy year. And an even crazier one coming up. Honestly, it’s been so great to really just live in the moment this year, even when it was hard. But as it is almost 2020, we, of course, have a lot of things in mind I’d like to do next year. 2020 is already shaping up to be really busy. Stay tuned!