I’ve read dozens of birth stories on blogs over the years and always wondered what mine would be, given the opportunity to become pregnant and deliver a child. I typed the whole thing out to my aunt and was surprised how short it was despite how long it was in duration. Maybe I’m just concise, but I figured it best not to bore you with too many details and just stick to the highlights in a single post.

As you may remember, Neil and I completed Hypnobabies classes with a coach. They were hugely important, not so much in the fine detail, but in just preparing me to go into birth without fear. I still feel like that’s the overall takeaway/theme of Hypnobabies. To know that birth is natural, to embrace it in all it’s parts, and to prioritize a hopefully minimal intervention experience.

I know now that my labor started on Friday (8/15) at 37w5d. Neil and I went to lunch at a local Thai place we love and after walking back to the office I felt a cramp. I didn’t think much of it, since Kaitlan had dropped about two weeks prior and I’d had a few cramps here and there because she was just so low. That night I just felt kind of “meh.” Not sick, but just not awesome. I went to bed early and woke up feeling a little better. I was scheduled to coach and had my own programming to do. I started with my programming but didn’t make it past a couple sets of heavier (for pregnancy) strict presses before the “meh” came back. I coached my client through headstands and wall-walks and continued to feel worse. I just felt crampy and worn out. I joked to Nate as I left that he should probably hold off on scheduling me to coach next week, and headed home.

Once home, things started to pick up pretty quickly. The cramps started to space themselves out into 20-minute intervals,…then 10-minute intervals,…before finally settling somewhere in the 5-minute range, each lasting about 50-60 seconds each. Packing mine and Kaitlan’s hospital bag had been on the list of things to do for the day anyway, so I went ahead and did that and took a nice long shower — all the while things continued to get more uncomfortable.

Around noon, we started timing what I finally believed were contractions. Neil was on-call, ironically in a conference call troubleshooting the FetalLink monitoring system at Women’s and Children’s Hospital. He wrote down my times while running capture reports, joking to the other guys on the call that he might be on-site soon. It was close to 3 PM when I saw a bit of blood while using the bathroom. Because I tested Strep-B positive, my doctor requested that under no circumstances should I continue to labor at home if my water broke or I saw blood. 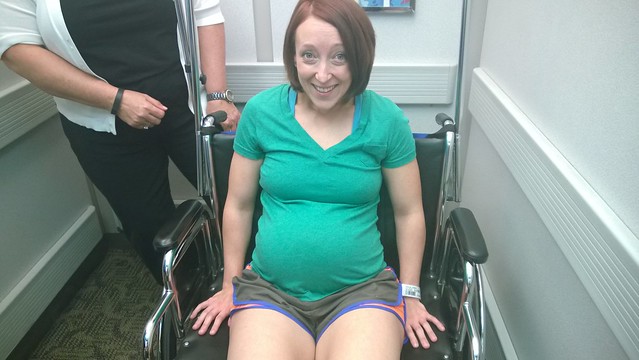 We called our parents and hopped in the car across town to the hospital where we met my mom and were admitted for observation. I labored another 2 hours while they waited to see if I would progress. There was talk of sending me home because I wasn’t progressing, but I really didn’t want to go home. Luckily I had progressed enough after several hours to be admitted to L&D, and we moved upstairs.

I continued laboring naturally for 24 hours. I was so so fortunate to have both Erica and my mom there in addition to Neil. We jokingly called Neil “A Team” and Erica and my mom the “B Team.” I think this is one of the best things I unintentionally did. Having enough people there to support but rotate in and out made sure no one was more worn out than I felt. My contractions continued to be about 5 minutes apart and increasingly strong, but for almost the entire 24 hours, I sat stuck at 4 inches dilated.

It wasn’t until the next morning that the doctors decided to break my water, which is possibly the weirdest feeling I’ve ever experienced. Unfortunately, once they did that, the contractions became MUCH stronger (she was direct posterior, putting the widest part of her head directly at odds with my back and pelvis) and almost impossible to labor through because I’d been at it for so long. I hadn’t eaten, could barely drink, and I felt every contraction slipping out of my ability to manage with hypnosis. Because Kaitlan was turned slightly, my spine literally felt like it was pulling apart from my pelvis. After about 10-12 of those contractions and talking to Neil, I requested a minimal-dose epidural. And it was the best decision I have ever made.

Why? After more than 24 hours, I no longer felt I was giving birth, I was merely surviving. Neil, Erica, my parents, and in-laws were all there and I could barely make eye contact with anyone. I was in a pain cave, with each contraction reducing me further and further to one single set of truths: Neil was sick with worry. I was stuck at 4 cm. And I had nothing left give. I didn’t feel more woman, more powerful or more in-tune with my own body. Once I received my dosage, I was a completely different person. I was still having contractions, and I definitely still laboring through them, but I could manage them, and still share the joy and excitement I was feeling with my awaiting family and friends. The best news came only 20 minutes later when they said I was 100% and ready to push. I don’t know if it was the 10 or so contractions immediately following the water break that I had basically pushed really hard through involuntarily (it was nuts), or if having the epidural managed to get me there, but I requested 30 minutes or so to get my head right and mind refocused. 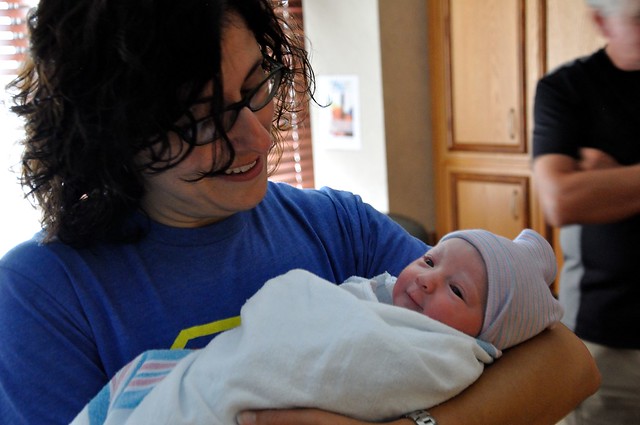 As crazy as it sounds, pushing was the absolute best part of my labor. I had Neil at my head encouraging me, Erica counting contractions like we were in the gym, and my mom, mother-in-law, and awesome nurse holding my legs and helping me change positions from on my back, to side-to-side, to all fours. The teamwork was so awesome, and I have never felt energy like that anywhere. The room literally felt like it was buzzing. The epidural was minimal enough that I still felt a good deal of pain, but it was effective pain that I could move and control and direct my pushing to. It was completely awesome. I also became immediately thankful for it when the doctor came in and started doing the perineal “massage.” It was definitely not a massage, it was very rough (but completely necessary), and I’m so glad I didn’t try to endure that naturally, I think I probably would have died.

After what seemed like a really short time, we were down to the last few pushes. The team of doctors and nurses had assembled, the room was filled with equipment, and my dad and father-in-law had made their way out to the lobby. Despite the fact there was a whole team of doctors and nurses, Erica continued to be my coach while Neil stroked my hair and told me everything that was happening. My mom and mother-in-law stood on the couches cheering and with a few easy pushes, Kaitlan made her much-awaited way into our world. I cry just thinking about it. I felt every part of her move through my body and out as the whole room lit up in cheers. For a brief minute, it felt like the entire world disappeared other than the three of us. We have a daughter! 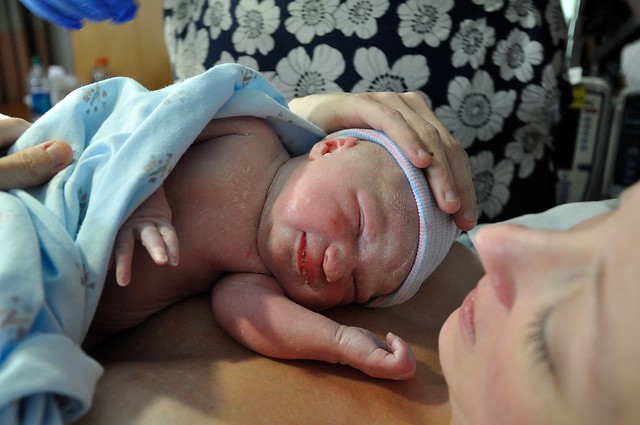 They immediately put her on my chest where she stayed for the next hour. She latched to my breast immediately and started eating like a champ. I made it out with one small internal tear that they stitched after delivering the placenta. The nurses were incredible. They got us all cleaned up and put together and we were on our way to recovery within 45 minutes to rest and have privacy. 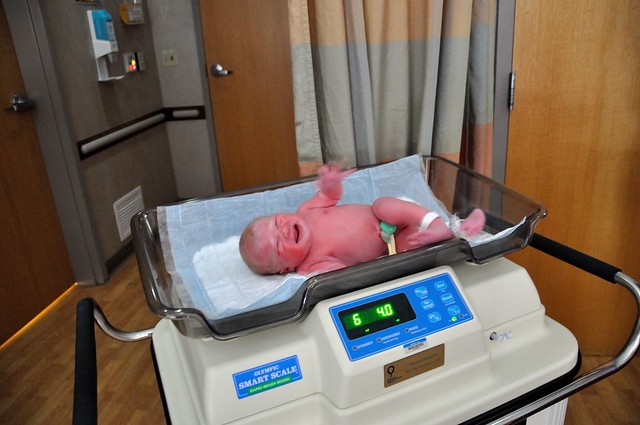 It was hard not to be immediately disappointed in myself for seeking some intervention. I worked really hard with Hypnobabies and all those testimonial videos make it seem like hypnosis can take on anything. And it really did help get me through the first 24 hours. But past that, having some relief gave me a much better experience and immediate connection to Kaitlan that I don’t think would have been possible had I tried to push through. I think the actual pushing and delivery would have been next to impossible, but worse, I think it would have been hugely traumatic. Instead, I can say that I really enjoyed the experience of delivering her. While it was much longer than I think I would have ever imagined, it was empowering, and has given me a new connection to my husband and family, and I hope they feel the same. 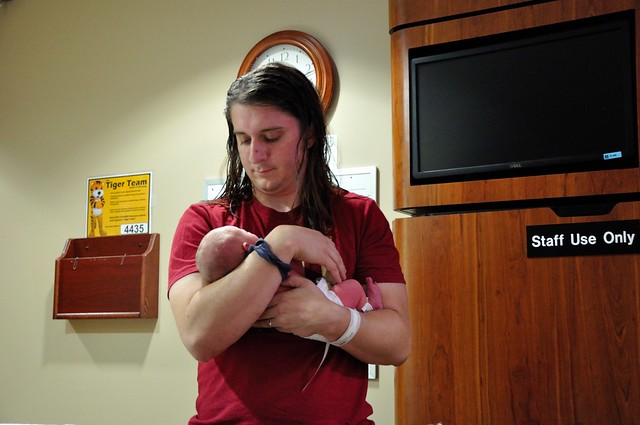 I’ve received quite a few questions about my postpartum recovery, so I plan to write a little bit more about it this week!