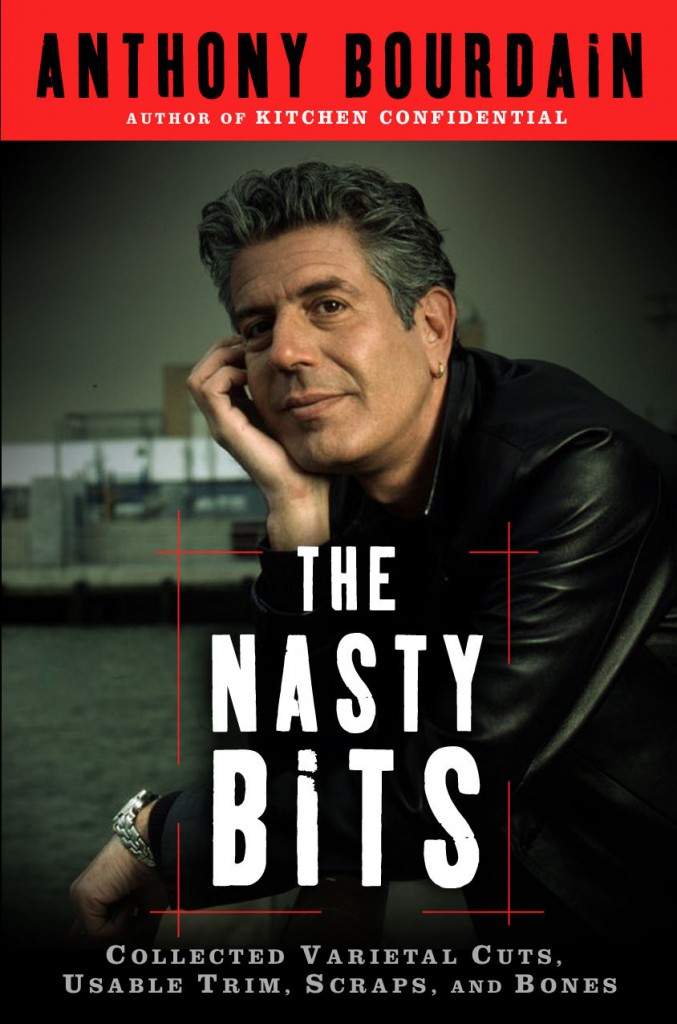 I’ve always wanted to join a book club. I’ve joined several failed attempts (both local and online), and when (Never home)maker announced their plans to start one, I jumped at the chance, and was one of the first people to sign up. I was thrilled that Anthony Bourdain’s Nasty Bits was chosen to be first, I had the book within two days and finished it within a week. To say I’m an eager suck-up would be a complete understatement.

Let me preface this with a disclaimer. If you’ve never read Anthony Bourdain’s books, enjoyed his show on the Travel Channel, or worked in a restaurant, then this might not be the book for you. Sure, it’s generally about food, he does use delightful language to describe a variety of dishes I’ve yet to try from exotic places I have yet to visit; but it’s not so much a food novel as it is about what he calls “this thing of ours.” The people, the culture, the lifestyle and the environment in which your food is made.

“System D”: The first story and one of my points of wisdom gleaned from years working in restaurants. System D refers to a manner of responding to challenges that requires one to have the ability to think fast, to adapt, and to improvise when getting the job done. It’s essentially being Macgyver and Bourdain describes it brilliantly. Add The Kitchen by Nicolas Freeling to your reading list.

“Viva Mexico! Viva Ecuador!”: I cheered out loud after reading this chapter. Finally someone gives credit where credit is far overdue. The backbone of kitchens; the dishwashers, busboys, foodrunners and early-morning prep cooks…are the people who for the most part can’t get a table in the restaurants they work in. Fiercely loyal, hardworking and never complaining they trudge through and never bat an eye at anything and often know more about every station within the operation than the GM or the owner.

“The Cook’s Companions”: Anyone else pull up their Amazon wish list and start adding titles? Suffice to say, I love hearing what inspires people, especially what they’re reading.

“Woody Harrelson: Culinary Muse”: I know, you’re thinking of stopping right now and unsubscribing to our blog, but hear me out on this. I love vegetarianism, 98% of my diet is vegetarian. I love raw dishes, and am so impressed by entire meals made to retain natural vitamins and oxygen while still tasting amazing. That’s a feat to envy. But I (non-judgementally) feel that some people take it too far sometimes, almost martyring themselves on a diet of bland, tasteless crappy-looking food to be some kind of cliché or food scenester wanna-be. Much of the world eats a mostly vegetarian diet without sacrificing health or taste and that’s what I feel he was trying to say (despite his overall public distaste of vegetarians and vegans).

“Pure and Uncut Luxury”: I didn’t know such places existed, well I did, but my poverty prevented me from acknowledging them. The money shot:

“Imagine if you will: You are one of only thirteen customers sitting at a long, wide, blond hinoki wood counter of such warm, inviting loveliness that you want to curl up on it and go to sleep. You want to spend the rest of your life rubbing your cheek – if not your nether regions – against it. The nation’s most highly regarded sushi master is standing directly in front of you with a knife, a plane grater, a hunk of fresh wasabi root. On both sides of him are casually deposited heaps of the sexiest looking fish you’ve ever conjured up in your wildest, soy-spattered dream of sushi heaven. You catch your breath and gape in wonder at the thick hunks of pale, fat-rippled otoro tuna, flown in that morning from Tokyo. Two silent assistants with shaved heads help the chef, moving among the austere trunks of green bamboo and a simple Stone-Age grill. There’s no menu and you don’t order, so you have no idea what’s coming, But already, as you there blood rushing to you head, lips engorged, hands trembling slightly, saliva thickening, semitumescent, you are absolutely certain that no one, anywhere on the planet, is going to eating better than you tonight. You are alone, in the nose cone of a rocket headed straight to the epicenter of gastro-culinary pleasure. And there’s nowhere you’d rather be.”

So, did I like it? Absolutely! The great part about a collection of short “stories” is that if you don’t like enjoy a particular one, you’re surely to like another. I wasn’t much a fan of his long drawn-out observations in Brazil, but I loved My Manhattan. There was something for everyone, and it made you feel okay for enjoying the less formal, liking the old, and being more than a little raunchy and inappropriate sometimes. He doesn’t write with the polished shine-on refinement of more “cultured” food writers; it’s a completely honest, 100% accurate representation of the personality you’ll find in the back of the house. It made me fiercely miss that part of my life, and being a part of that world. Not back-lit sign restaurants, but the fine dining establishments that push the envelope and have the most amazing people working for them.