What’s in my makeup bag

So a few months ago toward the end of my pregnancy, I wrote about my health and beauty regimen, or really, my lack of. I thought I’d do a little follow-up as I’ve been trying some new stuff and have a few long-time favorites in my makeup bag that I didn’t share in my last post. I’m one of those people who sticks with what they like until its discontinued. I really have tried to be more adventurous, but to a fault, I’m extremely loyal — or boring depending on your definition.

First, here are a few of the bloggers I’ve been inspired by lately on the topic:

Ashley of Writing Chapter Three’s What’s In My Makeup Bag
Sherry of Young House Love’s The Simple Life: Living With Less (And Loving It)

What’s in my makeup bag 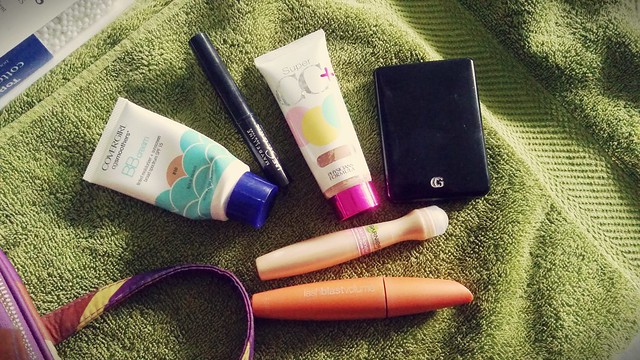 Cover Girl Smoothers BB Cream: Where were BB and CC creams when I was an awkward teenager. I remember the first make-up my mom gave me was a liquid foundation that was so heavy and awkward on my face. I felt like I was putting on my mask. This stuff is super light and stays on great all day.

Physicians Formula Super CC Cream: I received this as part of my Action Hero ambassadorship with Women’s Health. It’s thinner than my Cover Girl BB Cream, which is good for some areas of the face you want more color correction on.

Garnier Renew Anti-Puff Eye Roller: Tried this on a whim when St. Ives discontinued the cucumber eye gel that I’d used for YEARS. While this doesn’t feel as restorative, it covers my dark circles amazingly.

Cover Girl LashBlast Volume Mascara: I have used Cover Girl LashBlast since it came out. It goes on well, doesn’t cake and looks natural. I’m not one of those girls who likes a heavy eye (or heavy make-up in general), so this gives me a nice subtle boost.

Maybelline Line Stilletto Ultimate Precision liquid: I just started using this a few months ago when Walgreens was out of my beloved Physicians Formula Felt-Tip Eye Marker

Pond’s Cold Cream Cleanser: Tried and true, it makes my skin feel so soft and doesn’t dry it out, especially important during the cold months. Pond’s is the most gentle of the brands I’ve tried.

If you saw my Loving Lately/Friday Link-up post from a few weeks ago, you saw that I’ve completely fallen for Paula’s Choice 2% BHA liquid. Seriously amazing stuff. I just ordered my second bottle even though I still have 1/3 of my current bottle left. My skin feels amazing. 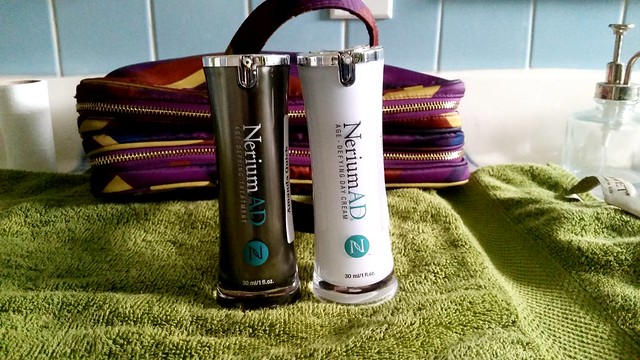 I’ve also just completed a trial of Nerium AD. One of the girls from my gym sells it and swears by it. She has amazing skin herself so when she asked if I wanted to try it, I leapt at the opportunity. So far, I’m completely loving it. You’d never know I was waking up twice a night…

Even though I’m trying out a lot of new stuff, my goal is to find the stuff that does the most so I can wear less. It’s a work in progress. I’d even like to delve into the DIY skincare realm as well. I don’t like complication, and I like having a minimal arsenal and a clean bathroom. Yup, practical to a fault.

Disclosure:I am participating in the Women’s Health Action Hero program and have been provided with a sample of Physican’s Formula Super CC Color-Correction + Care CC Cream SPF 30 and the opportunity to participate in an ambassadorship program for the period of a year in exchange for my thoughts, awareness through blog posts and opinions about any products or opportunities I partake in. I was also given the NeriumAD Night & Day Combo Pack to try by my friend, but not with the request to blog or give my thoughts in any capacity.