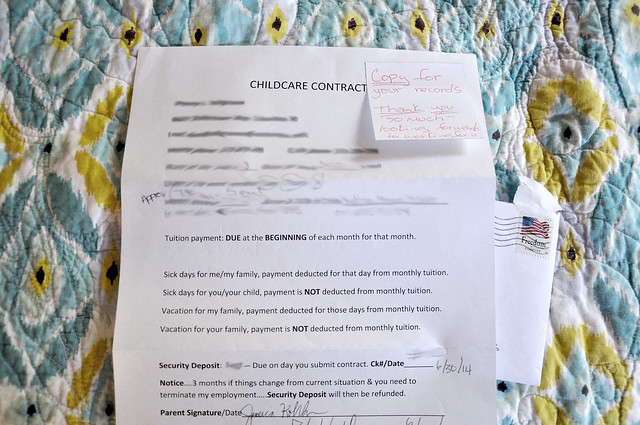 We have daycare! If you had asked me a year ago the thing I would be most excited about this year, daycare would have been the last answer. No seriously, the last. I’d heard that it was difficult to find, but I never imagined when we started looking that it would take as long as it has to secure a solution, or a semblence of one, depending on how you look at where we started.

If you remember, we started looking for daycare in week 19. Our goal was to find a safe, secure place for little MK to go on a full-time basis while we work (we both work full-time and will after maternity leave) that would preferably be in-home, but a smaller center if that ended up being the case. We immediately were recommended some great places, but they didn’t have openings, and didn’t really know what the situation would be come mid- October.

So we added ourselves to waitlists. Seven to be exact.

There were definitely more providers, but some didn’t have a waitlist. A few wanted non-refundable deposits to be added to the list. And others indicated that they knew their waitlist was extended out 2-3 years.

The other big barrier was cost. Some places wouldn’t take an infant for less than $900/mo. That was more than our intended $750-800 budget.

Weeks passed and we followed up regularly, but most indicated finally after a few calls that they would have no idea until about 6-8 weeks from our desired start date, basically meaning that about the time I went into labor I would have to start calling again, not exactly the pressure we wanted to be feeling while trying to adjust to being new parents and me already having limited leave.

Finally, we received a call back from a woman who offered part-time in-home care, 3 days a week. She was amazing, bright, bubbly and only cares 1-3 babies/children from her home — literally 500 feet from my parents house. We left the meeting feeling really good, but not knowing if it was even doable.

After talking with my parents about our dilemma and our amazing meeting with the potential provider, they graciously (and I mean GRACIOUSLY) offered to take the other two days a week. We’ll of course take off any day they can’t or aren’t able to care for her with our own vacation, and we have enough flexibility with our jobs to make that work.

I can not tell you the relief I felt. Slept better that night than I had in weeks. Not only will she be in a small in-home daycare, but she will be with my parents or us with us the rest of the time. Our plan is to hopefully make this work until she’s ready for preschool and a more structured setting. That’s a whole new battle, as those waiting lists are supposedly just as bad, if not worse. We’ve been told to start researching those now. I think I’m going to give myself a few weeks.

I’m in the thirties! This feels like the beginning of the home stretch. I also am starting to feel positively planetary. My stomach is a solid little ball of obstruction. It’s weird though that while it is a part of me, it almost feels somewhat detached from me, like I’m merely smuggling it under my skin. Apparently I’m not alone, as several people have confirmed feeling this way when I asked them about it.

People also keep saying to enjoy this time because it’s the time that will make me miss being pregnant most afterward. I’m just…not there yet. Other than CrossFit, everything is awkward and uncomfortable. I’m ready to get out of cars more gracefully, and sit on the couch without getting a side cramp. I loved the twenties. The thirties just feel like a means to an end. 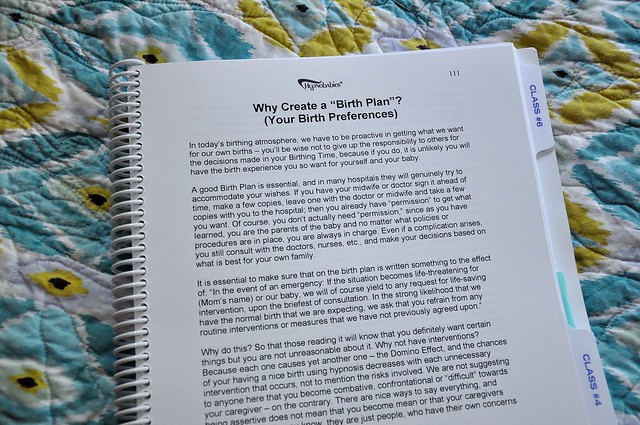 I received a lot of great direction from my Hypnobabies coach, Megan Oberg, as well as the many books I’ve been reading over the course of pregnancy, especially Gentle Birth, Gentle Mothering by Sarah J. Buckley. It’s nice to feel like this day isn’t all that far away and that preparations for it are now in full swing. 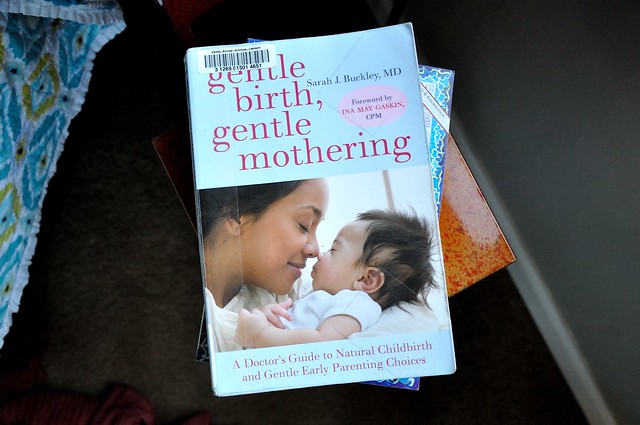 As I mentioned above, Gentle Birth, Gentle Mothering was a great read. At first it felt a little too out there for me, and I almost gave up on it, but I think Buckley did a really great job of balance and offering a lot of information, especially on medical interventions during birth and infant care in the fourth trimester.

I also just wrapped up Spiritual Midwifery by Ina May Gaskin. Even though I could never count this as among the most practically informative of the books I’ve written, I think it’s one of the best. It really emphasizes, through the story of her community and the many births that happened early on, how important mindset is to giving birth and parenting. It’s also a complete hippie throwback, and the word “psychedelic” is thrown around more than a few times. I had my mother-in-law request a copy from the library, I thought she’d definitely appreciate some of the stories — especially those that happened on the road and in weird locations.

Food is continuing to go well, although my stomach is feeling smaller and smaller. I’ve resorted to eating small amounts throughout the day to avoid the discomfort I feel I try to eat normal sized meals. She’s definitely rearranging my organs in there, and I’m feeling the much-talked about feet in the ribs, which is fine, because it means she’s still head down at this point.