Yup, officially dropping the postpartum, these updates are all about Beeb! Here is her 5 month update: 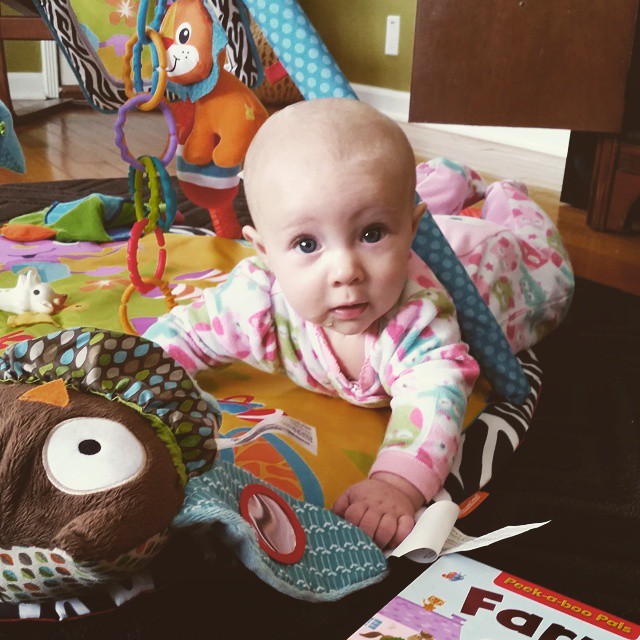 Month 5 has probably been the most significant month developmentally yet. She hit this week about halfway through where it felt like she became a completely different person. She rolled over, started using syllables, gained a neck, and started rocking solids like a champ.

The biggest development by far was rolling over. I mentioned in her 4 month post that I thought she was trolling us, and I still think that. She also decided to roll over for the first time when NO ONE was looking! I had set her on her play mat while I was drying my hair, and was looking in the mirror, and when I looked down, she was wedged against the side on her belly. She quickly realized she did not want to be on her belly and roll back, and that seem to be the extent she’s taken rolling over ever since. 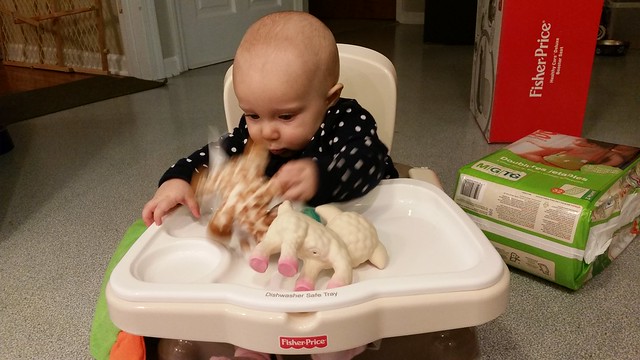 She also solidified sitting up with assistance. Still a little rocky, but that’s mostly because she’s typically smashing toys around and goes a little too HAM.

Second to rolling over, the introduction of solids was another big happening during 5 months.

Kaitlan started showing interest in food around Christmas/New Year’s. If we had food or drink in our hands she would thrust her whole face at it. So obligingly (but sparingly) we’d give her a taste, or let her put her mouth on our glasses to “drink.”

Second day of solids (banana) from Kohler Created on Vimeo.

We opted to wait until getting “official” clearance in her 5 month check-up. Her first food was bananas mixed with breast milk, strained and mashed into almost a liquid, but we soon added sweet potatoes, avocado and applesauce.

She’s quickly progressed mashed solids with no breast milk whatsoever. She eats like a champ, and has loved everything she tried. I raided the library and am ready to start the next stage of baby food. Yup, #dorkout.

Having a little baby in the winter months is hard. As much as you don’t want to let paranoia and worry turn your new family into a collective hermit, it does. Between the measles outbreak, mystery tick-born viruses, the flu season, and just generally being surrounded by sick or recently sick people at work, you end up try to protect your baby wherever you can because they literally have no defense. For us, that meant almost complete seclusion. 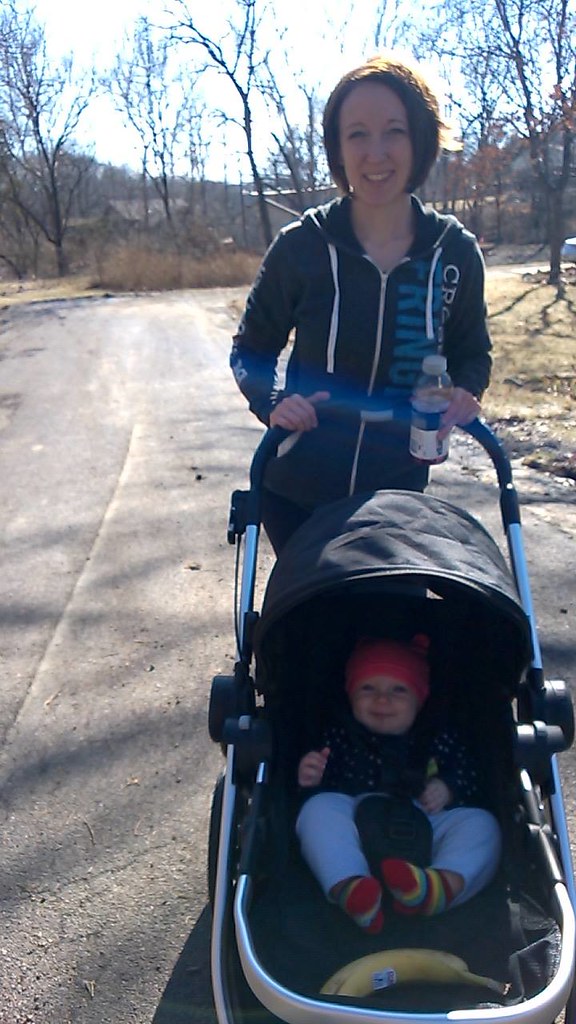 But we’re slowly getting out a little more. Warm days mean some walks in the stroller (her first front-facing ride!), and some trips to the grocery store. Kaitlan is absolutely great out and about if you are wearing her, or she doesn’t have to sit in the car seat. She looks around and babbles at everything she sees. I can’t wait until Spring when she can finally be outside on a regular basis. I feel horribly guilty when she reacts like a vampire every time we take her outside.

On that note, I am so happy to be at the half-year mark. I was having a conversation with one of my friends at the gym the other day. Her kids are older, and she described the first few months perfectly. Trauma.

Yes, new parenthood has a lot of amazing moments, but early on, they are interspersed with some of the hardest of your life, and you are just too clueless and overwhelmed to be anything but terrified, and functioning on what can barely be considered a nap. Life really becomes a triage of trying to maintain a pulse on far too many things, poorly. People can say that “everything else can wait,” and sometimes it can, but most of the time it can’t.

So in all honesty, I didn’t like the first 10 or so weeks, I really didn’t. Sure you have your victories, your sweet moments, and randomly you get a good night of sleep or a couple of hours to yourself to recoup your optimism but compared to now? No comparison.

We fall more in love with her every day, and the best part of that is that we think she is beginning to realize it. I don’t care if she loves me back, but just that she understands that she is safe and loved by us.