Ack! Time really got away from me in month 6 and now we are halfway through month 7 and I’m just getting around to writing this update. 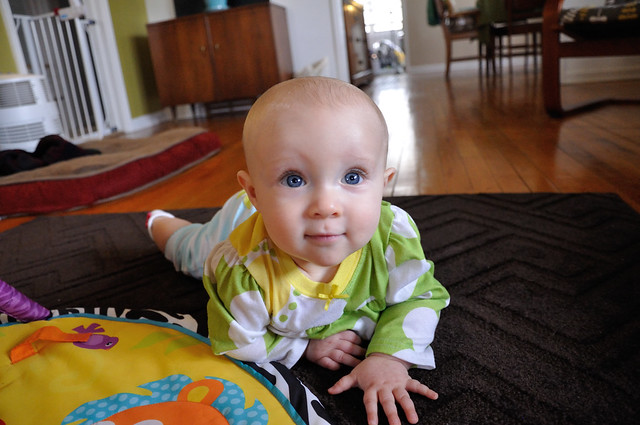 I used to think of the 6-month mark often during pregnancy and especially during the first few months of parenthood. I saw it as this outlying benchmark of when we might be in more of a groove with parenthood. It seemed almost impossible to imagine transitioning  Kaitlan to solids, and enjoying the spring weather with another CrossFit Open season and preparation for Neil’s racing. But here we are, and it is definitely the case. We have hit a perfect, semi-predictable groove that we’re having a lot of fun with.

Kaitlan’s development leaps continue to be nothing short of insane. When we’re in the thick of them it’s not only very obvious, but the things she can suddenly do in the span of 24 hours will make you do a double and triple-take. I used to laugh at people thinking their babies were geniuses, but I get it now.

The huge milestone for 6 months was progression of sitting up and sitting up unassisted. Over the course of a few days she went from sitting and toppling over to sitting perfectly balanced and self-balancing when moving and grabbing for things.

And grabbing and reaching for things she did.

6.5 Months, KK grabbing for Pizza from Kohler Created on Vimeo.

She became such a little inspector of everything within her reach, grabbing with one or both hands, and then spending several minutes turning things over, hitting them against things and if we opened them for her, turning them over and repeating the process again. Then of course they would have to go in the mouth for the final check.

6.5 Months, KK drinking from a cup from Kohler Created on Vimeo.

All this exploration has led to some really interesting little “likes” of hers — like opening and closing the refrigerator (with assistance of course), and drinking out of regular water glasses (just little sips of water) and even using a straw. She also likes to grab at the little magnetic spice containers we have on the side of the fridge. She likes to squish things and scratch things with her fingernails to hear the sounds they make or the marks they make.

She also started using movement to show emotions. When she’s feeling shy/bashful, she tucks her chin to her chest and swings an arm and when she’s mad, she hurriedly grabs for whatever is in reach to slam it repeatedly. She definitely has a little attitude!

This has also been the first month she has shown real interest and preference for the types of toys she wants to play with. She doesn’t have any real interest in typical infant toys that involve batteries, lights, and buttons. She likes things with parts. Her favorite toys by far are the stuffed food from IKEA. 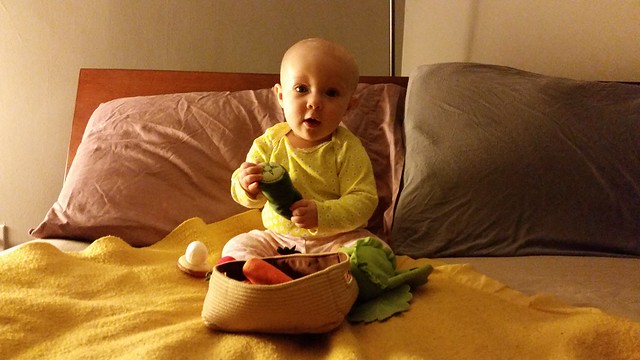 Oh my gosh does she love her fruit, veggies, weird fish set, and cupcakes.

I seized upon this and bought her a little kitchen set from target — also a hit. 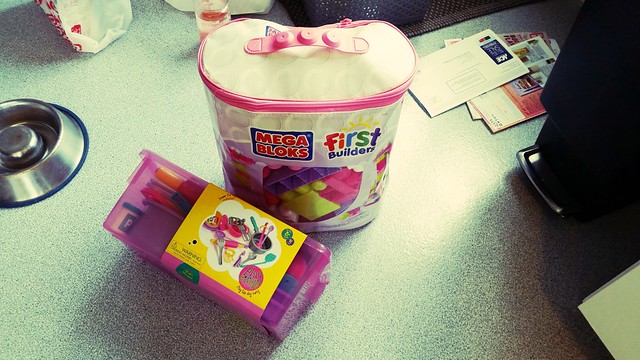 I then maybe went a little too far too fast and bought a set of oversized blocks. She’ loves banging them together and moving them around, but putting them together and actually constructing anything is definitely still a ways off. I just can’t stand the idea of buying her things she’ll be bored of quickly. She has absolutely no interest in regular stuffed animals or toys with batteries (ie normal age-appropriate toys). I like to find things that will evolve with her play.

Food continues to be the most fun area for me. I love putting as many flavors in front of her as possible, and making and planning her meals around her nutrition needs. Every weekend we looked forward to adding new things, and the biggest hit by far was whipped potatoes with broth and other veggies. In addition to loving everything, she enjoys inspecting her food with her hands, which has made for some really messy meals. She also demands “tastes” of everything we’re eating. If we’re eating she’ll crane her neck and open her mouth, opening wider if she feels she’s being ignored and then spitting if we don’t immediately offer her a taste. 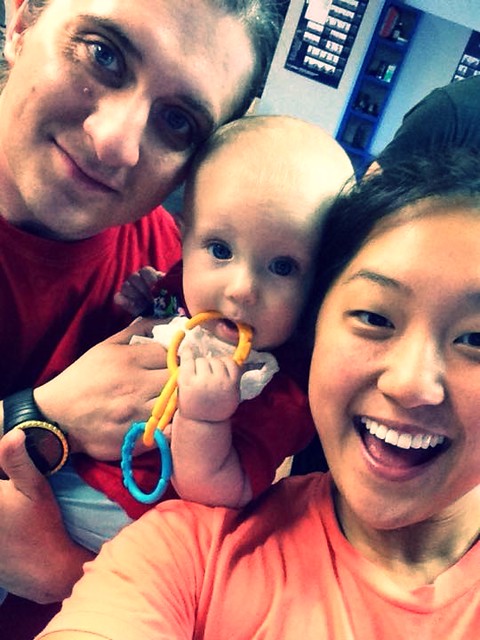 So that was 6 months. I feel like I didn’t cover even a fraction of all she continues to astound us with. She’s such an intricate little person, and things change so often, so quickly! It’s fun taking all the new little developments and scheming about the person she might one day become. One thing is for sure, she’ll be a force to be reckoned with.