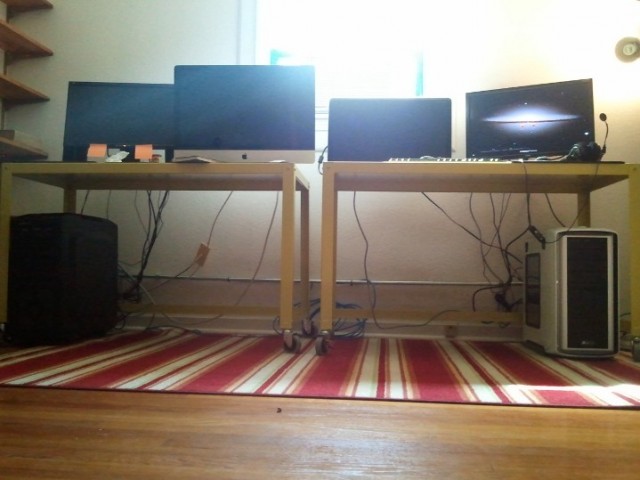 You might say we’re technies. A lot of our lives are spent online, definitely not helped by the fact that both Jessica and my professions are in information technology in one way or the other. By day I am a Network Administrator and by night I try my best to be a programmer, however my real passion lies with the hardware side of IT. Jessica is an instructional designer as well as a great graphic designer, having done her undergrad in graphic design and illustration and her masters in Learning Systems Development. She’s also trying on the programming hat for size.

I have been enthralled by computers since I was 13 and our family got our first home computer. It was an ACER Pentium 1, 75mhz with MMX! It was…. awesome. I immediately got every game I could find for it through garage sales and the library. Our family was fairly poor, so almost every game was nearly free or paid for with allowance money. We also did a lot of pirating. It was too easy to “copy that floppy”. Remember when they tried to combat piracy on 3.5 inch floppy disks by not allowing you to flip the read/write slider on the back? A simple piece of tape and you were golden! Yup, all you had to do was tape over it.

Then I got my own first PC after taking a IT grunt job at 15. It was a home built PC Intel 486 100mhz with 16 (!!) MB of RAM and a great 4 meg graphics card. Awesome. That really started it all. I convinced my parents to get me a second phone line for the internet and I was off. In 1995 the internet was quite young, and if you were diligent enough you could have a field day doing anything you wanted. I hacked, I war dialed, I did everything I could and learned a lot. 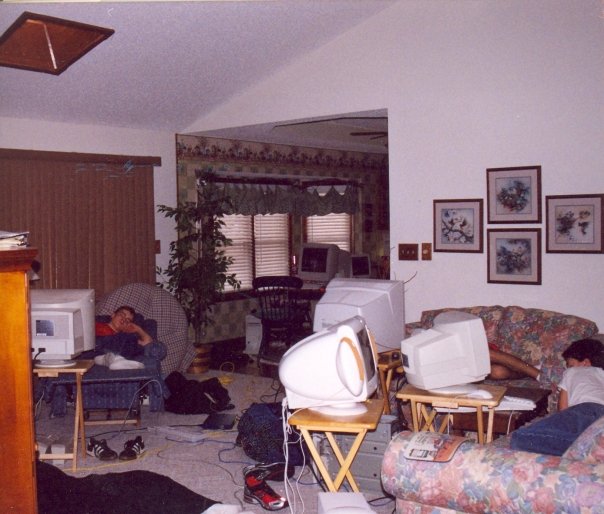 Anyhow I am kind of getting away from the main point here. What I want to talk about is our home tech setup. Sometimes we get asked what kind of devices we use and why, and I wanted to have a post to point people to without boring or confusing them to death.

I want to preface this by saying that we build our own computers. Why? Because they are above and beyond better than any retail PC or MAC you can buy. People often assume that because of our backgrounds, especially Jessica’s that we are a Mac shop, or that only macs will work for what she does. That is simply not the case. The computers I have built for us are far more powerful and of better quality than any Mac she could buy for the price.

My goal with Jessica’s computer build was to give her a very stable setup. Fast Intel processor that does not need overclocking in addition to plenty of speed with the solid state drive that I believe is a must in any build these days. To complete the build, I selected an IPS monitor for the color accuracy she needs for graphics and multimeda. The graphics are overkill for her profession but we are gamers as well, so game on!

With my PC setup I went a bit more budget-friendly, but above all I wanted it to be stable, cool running, and quiet. I decided on an AMD build for cost savings, however I went with a very nice case that allowed for really good cable management, and a very nice water cooling system. By water cooling the CPU you really eliminate a lot of the big CPU fan noise. I built this in 2011 and it is still very quick.

To complete my build, I opted for a 120hz monitor because I do game a lot on this PC. The 120hz refresh rate makes things smooth, not only in gaming, but also in windows. The cursor and input movements are just amazingly fluid. If you have never experienced a true 120hz monitor, I highly recommend them… they are worth the extra $$$.

I expect our rigs to last us well over 5 years, and beyond that because they do allow for small upgrades along the way. Typically after 5 years a commercial PC will be excruciatingly slow and require complete replacement. Not so much with the right custom built devices. 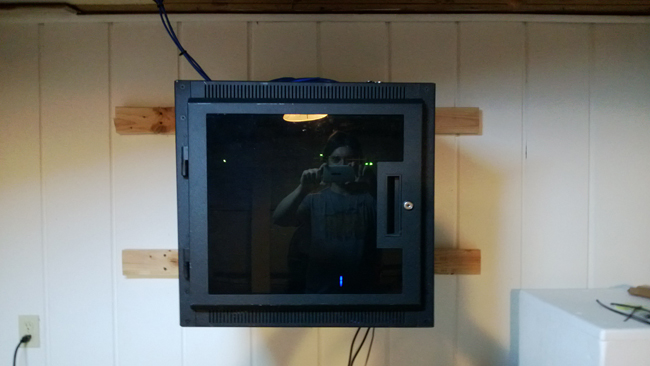 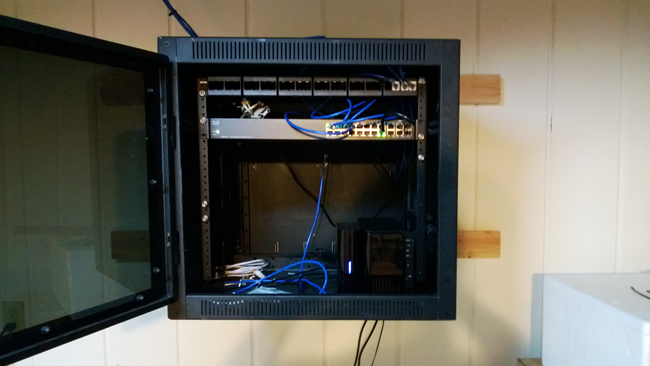 Four our home network I decided to get a bit geeky and focus on an enterprise setup. Because by day I am an Network Systems Analyst, I tend to desire a bit more control and network analysis than an average Linksys or Netgear all-in-one consumer product will give me.

During our home electrical update to replace old aluminum wiring with new romex stuff, I had the electricians pull cat6 cabling to a few rooms so that we could house all of our network and server devices down in the basement. Storing everything in the basement not only keeps the equipment nice and cool, but it also eliminates the presence of bunch of devices sitting on shelves with cords running crazy. All of our IT is now centralized on a wall mounted rack where it stays exceptionally well organized. 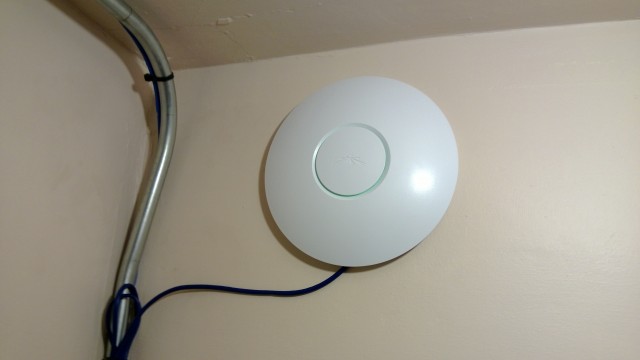 The dedicated wireless access point allows us to place it in the middle of the house because it does not to be directly connected to the modem or router. Since it’s only function is to provide wireless access it really is a night and day difference when it comes to signal strength and quality. It really blows the all-in-one devices out of the water. The system also allows us if needed to place more than one access point in the house to expand our wireless network while using the same SSID and network security. It is quite slick for the price. 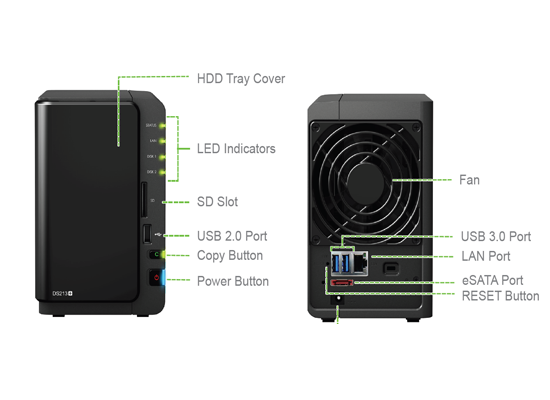 Synology offers a great product with a TON of features. The Synology not only functions as a NAS but it can also be a syslog server, web server, PHP server, cloud server, music streaming server, and so much more. You can even develop your own “apps” for it. It has been well worth the money so far.

For our setup I have the system running RAID 1 with a nightly backup to an external USB drive hooked to the back of it. That gives us 1 drive failure redundancy as well as a secondary data backup. I also have our Cisco ASA sending its syslogs to the Synology so that I can analyze if necessary. 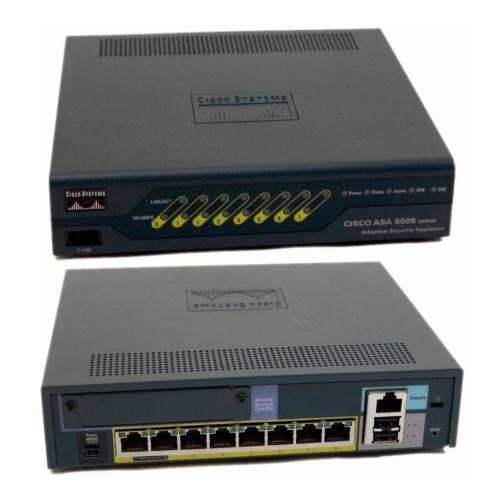 I decided to get a Cisco ASA 5505 Firewall/Router/DHCP appliance because not only am I working on some Cisco certifications currently, but I use these in my day job almost daily. These appliances can be very powerful and rock stable if you know what you are doing, however they tend to have a fairly big learning curve. They are certainly not your plug and play home router. You should probably know a decent amount of Cisco CLI as well as Cisco ASDM and have a pretty decent knowledge of networking in general in order to have much success with the ASA. Fortunately I do, so this thing is a blast to mess around with and is very secure and stable.

In the end I feel our setup really combines some enterprise level technology and reliability with affordability. We also maximized the performance in our work rigs by building them ourselves and will incur much lower upgrade costs in the years to come since we will be able to upgrade components easily by ourselves.

I felt this post was important to write not only as a reference for what we’re doing, but because so often bloggers focus on software, apps and what computers they are using, but I wonder if they’ve given serious thought to their storage and backup needs. All data, even if its just pictures or old school papers, is worth securing for the long haul.

If you have any questions or comments on anything feel free to give us a shout below!